One of the major benefits of the Java language in comparison with other object oriented languages (like C++) is that programmers do not have to handle memory allocation during execution of the program. It is totally delegated to the garbage collector (GC) which is in charge of removing unused objects to release memory. 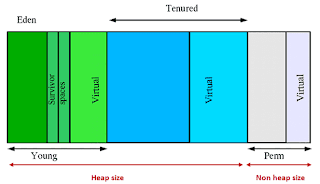 The memory of the JVM is first slitted into 2 parts :

The heap is devided into two generations: The Young Generation and the Tenured Generation.

The heap contains all Objects created during execution, this space should be frequently visited by the GC in order to clean up unused objects (=objects not referenced anymore). It is also slitted into different section according to the lifetime of the objects. Initially all objects are stored into the Eden section. Most of this objects will then be destroyed at the next GC visit because they are not used anymore. But some of them need to be kept because they have a longer lifetime and they will be used in the future. Therefore they are moved into the Survivor bucket. In the Survivor bucket GC calls are less frequent than in the Eden bucket. This two buckets represent the Young generation and contains all the “newly created” objects.

If objects stored in Survivor buckets, survive to other GC visits they are then moved into the Tenured generation (or Old generation) bucket until they are destroyed by the Garbage Collector.
The non heap memory
It comprises of ‘Method Area’ and other memory required for internal processing.
In addition to the heap and method area, that are available for all threads of a JVM, every thread also has exclusive access to memory that is created for each thread: 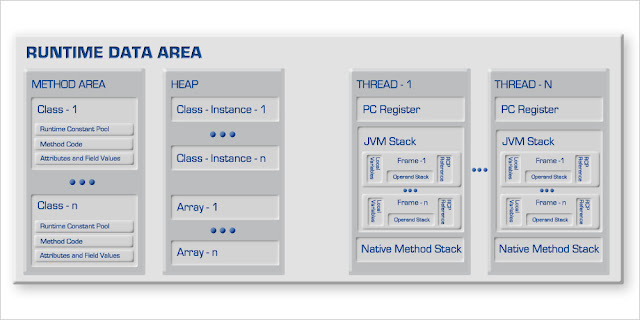 Bad tuning of the JVM can lead to several issues. The most obvious is that you set memory parameters too low to run your application so it cannot even start. But there are others.

If your memory parameters are too low you will probably have to tackle OutOfMemoryError since your application requires more space than what you allocated.

If your memory parameters are too low you will decrease the performance of the application. Indeed, the GC has to run very often in order to maintain the available space, which requires some time and also needs to stop the application.

On the other hand, allocating a huge memory to the JVM is also a bad practice because you will use (consume) much more than what you need and also because other resources won’t be able to use this unused space : OS, database, …. Therefore this may lead to non optimal performance as well.
Reference http://batterywalam.wordpress.com/category/j2ee-diagnostics/jvm-tuning/jvm-memory-organization