life cycle of a message-driven bean.

The container is responsible for maintaining the life cycle of a message-driven bean. A bean moves from the ‘does not exist’ to the ‘method ready’ state using the following methods:

The bean instance in the pooled state can perform operations using the onMessage() method. The container ensures that only one thread executes at a particular moment. The message -driven beans connect to the JMS server, consume messages from the server, and process those messages.

If you use class.newInstance(), then u can change the class which is been instantiated at runtime. In other words for example

Here, you can change the String argument in the class.forName() method and change the class which is getting instantiated. Say u got this String from a property file, then u don't even have to compile the class in order to get another different class instantiated.

Static block resembles a method with no name/arguments/return type. There is no need to refer to it from outside the class definition, therefore it doesn’t need a name. If it doesn’t have any name, who is executing this block? Simple :) This block is executed by the Java VM when the class is loaded.

Why Do I Need a Static Block

Static blocks are very useful if you consider doing things like below:

Java doesn’t limit you with one static block. So you may define more than one static block. JVM combines them together and then executes. Here you might think what about the order of all these statements? Since static code blocks could be separated by non-static code blocks, the execution might not be in the same order you see in the code. You must remember that JVM combines all these blocks into one single static block and then executes. Here are some notes from my understanding:

So what happened in above code? Let me try to explain. First of all, Java didn’t do anything before the class is loaded into JVM. After loading, JVM combined all the static blocks into one regardless of their position in the code, and started to execute each line. If line is executable JVM executed that line, otherwise it just kept the method/variable blocks on a special area in the memory. And when they are needed, JVM executed those statements too. If you double check, we have 2 static methods, one is show and the other is main. Show is executed as the first item since it is called within the static block. However, main is executed after all static initializations.

One thing you might notice is there is another block without static keyword. And it’s been executed twice. Yes, that block is not a static block. It is instance initialization block.

Yes, we have couple limitations about static blocks:

Posted by Ramesh at 7:49 PM No comments:

Programmers often speak of the Java Network Launching Protocol (JNLP) interchangeably with the term "Web Start". The JNLP protocol, defined with an XML schema, specifies how to launch Java Web Start applications. JNLP consists of a set of rules defining how exactly to implement the launching mechanism. JNLP files include information such as the location of the jar package file and the name of the main class for the application, in addition to any other parameters for the program. A properly configured browser passes JNLP files to a Java Runtime Environment (JRE) which in turn downloads the application onto the user's machine and starts executing it. The development of JNLP took place under the Java Community Process as JSR 56. It includes the original 1.0 release, the subsequent 1.5 maintenance release, and as of 2006[update], the pending 6.0 maintenance release. JNLP comes free of charge; developers need not pay a license fee in order to use it in programs.

Important Web Start features include the ability to automatically download and install a JRE in the case where the user does not have Java installed, and for programmers to specify which JRE version a given program needs in order to execute. The user does not have to remain connected to the Internet to execute the downloaded programs, because they execute from a locally-maintained cache. Updates of the software download from the Web become available when the user has a connection to the Internet, thus easing the burden of deployment.

Any computer user can use JNLP by simply installing a JNLP client (most commonly Java Web Start). The installation can occur automatically such that the end user sees the client launcher downloading and installing the Java application when first executed.

JNLP works in a similar fashion to how HTTP/HTML works for the web. For rendering a HTML webpage, after the user clicks on a weblink, the browser submits a URL to a webserver, which replies with an HTML file. The browser then requests the resources referred to by this file (images, css), and finally renders the page once it has received enough information. Page rendering usually starts before all resources have downloaded; some resources not critical to the layout of the page (such as images), can follow on afterwards — or on request if the "Load Images Automatically" browser-setting remains unset.

It basically accepts time in millisecond and then extracts the last 3 digits and makes it nanos. So for a millisecond value of 1304135631 421, I'm getting Timestamp.getnanos() as 421000000. This is plain calculation (adding 6 zeroes at the end).

Posted by Ramesh at 8:56 AM No comments:

Interfaces of EJB in Client Server

An EJB container is the heart of an EJB environment, in the same way an ORB is the heart of a CORBA environment. The container registers EJB objects for remote access, manages transactions between clients and EJB objects, provides access control over specific methods on the EJB, and manages the creation, pooling, and destruction of enterprise beans. The container also registers the home interface for each type of bean under a given name in a JNDI namespace, allowing remote clients to find the home interfaces and use them to create enterprise beans.
Once you provide the EJB container with the home and remote interfaces and the implementation class for your bean, along with a deployment descriptor, the container is responsible for generating the various classes that connect these components, as shown in Figure. The home and remote interfaces you provide are RMI Remote interfaces; the container generates both the client stubs and the server-side implementation for these interfaces. When a client looks up a bean's home interface through JNDI, it receives an instance of the home stub class. All methods invoked on this stub are remotely invoked, via RMI, on the corresponding home implementation object on the EJB server. Similarly, if the client creates or finds any beans through the home stub, the client receives remote object stubs, and methods invoked on the stubs are passed through RMI to corresponding implementation objects on the server. These remote objects are linked, through the EJB container, to a corresponding enterprise bean object, which is an instance of your bean-implementation class. Optionally, the EJB container may also generate a container-specific subclass of your bean implementation (e.g., if it wants to augment some of your bean methods to facilitate synchronization with the container).
Posted by Ramesh at 8:58 PM No comments:

I am coming back to Java after 6 years. I am a software professional working on Mainframe 3270 screen coding CICS/Cobol program. I studied java, c, c++ and .net languages at college. In college, my nick name is Dennis Ritchie.. I am very much interested in object oriented languages, but I got job to work on mainframe environment.
Thanks to IBM who brings Java on mainframe - System z Application Assist Processor (zAAP) and Pershing who gives me an opportunity to work on this ..
What is zAPP?
zAAP, which runs asynchronously alongside general-purpose processors, is designed specifically to execute Java programming under the control of the IBM JVM and assist the general-purpose processors by executing the Java cycles. Utilizing zAAP, therefore, customers can expect to realize reduced demands and capacity requirements on their general-purpose processors, which can be better utilized by other, non-Java workloads. 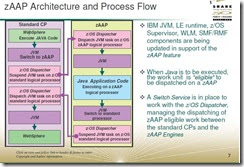